By Gillian Follett | Special to The Republican

Denise Barstow Manz is hoping to increase awareness of the Pioneer Valley’s dairy farms one scoop of ice cream at a time.

Since 1806, generations of her family have been operating Barstow’s Longview Farm. Today, its farm store supplies fresh dairy, meat, baked goods and other products. Still, she’s concerned Western Massachusetts residents aren’t aware of the impact of dairy farms have on the region’s agricultural network.

In 2018, Barstow Manz organized an event she called the Dairy Month Dairy Crawl. It invited Pioneer Valley residents to buy ice cream from several dairy farms located in Hadley, South Hadley and Sunderland and receive a stamp on a Dairy Crawl “passport” at each destination to track their progress.

She reached out to five nearby farms — Maple Valley Creamery in Hadley, Smiarowski Farm in Sunderland, North Hadley Sugar Shack in Hadley, Flayvors of Cook Farm, also in Hadley, and McCray’s Farm in South Hadley. All eagerly agreed to serve as stops on the Dairy Crawl alongside Barstow’s Longview Farm.

Now in its fifth year, the Dairy Crawl, which runs through Thursday, is about more than just eating sweet treats.

“Really, part of the goal is to get people to learn more about dairy farming and what it means for their communities,” said Barstow Manz. “And also, obviously, to get them to go to these farm stands to buy ice cream and, hopefully, some other stuff that might catch their eye while they’re there.

“I wanted to make this passport so that we could share this story — this heritage — with our community who may be living right here and don’t realize the value that (dairy farms) have.”

June was selected because it’s long been recognized as National Dairy Month, an annual celebration of the importance of the dairy industry and the nutritional value of milk. According to the American Dairy Association, cow’s milk provides “13 essential nutrients, including high-quality protein, calcium, potassium and vitamin D” at a national price of 25 cents per cup.

Dairy farms in the Pioneer Valley also contribute to local food security with milk and other dairy products and help protect land from development, which provides habitats for wild animals and a place for rainwater to seep back into the ground instead of being obstructed by concrete, Barstow Manz said.

“Dairy farms are doing so much more than just providing local food for our communities,” she said. “These farms are so ingrained in what we think of when we think of New England. They’re part of our landscape.” 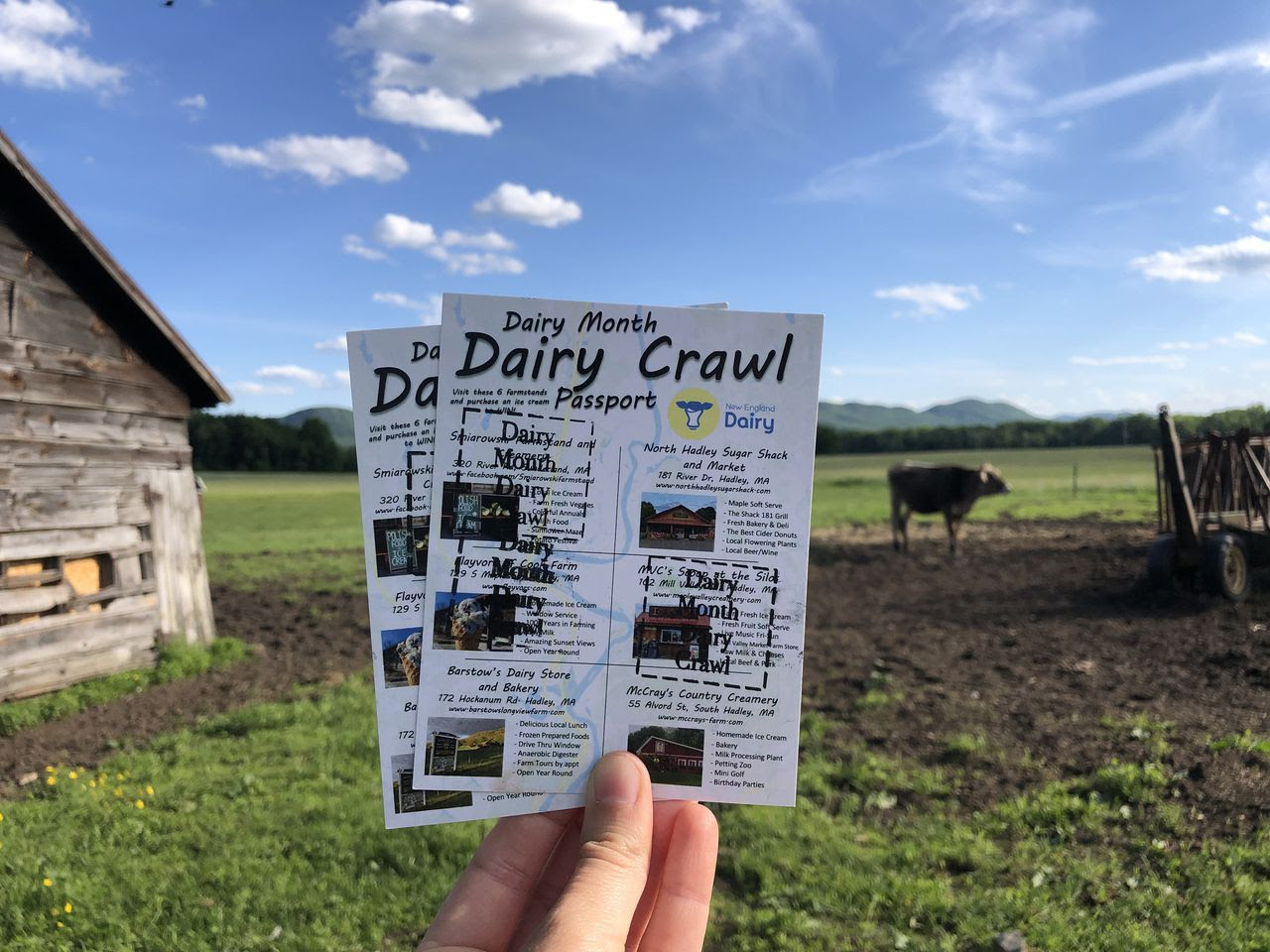 Barstow Manz received grant funding over each of the past two years from New England Dairy, a nonprofit organization that works to educate New England residents about the work of dairy farmers. The funds help market and promote the ice cream event, creating “passports” that “travelers” can enter in a raffle to win a $50 gift card to one of the six farms.

“The Dairy Crawl is a great way of helping folks engage with dairy farms throughout the Pioneer Valley, and get to see different farms and different things they do on the farms,” said Michael DeAngelis, of New England Dairy. “It all goes to help show that story of how dairy farmers are such an important part of the fabric of New England, and it gives them a chance to raise their voice and tell their own story.”
Many people don’t realize the challenges involved in dairy farming, said Debby Cook, the manager of Flayvors of Cook Farm’s ice cream business. Although she enjoys her work, the seven-day work week and thin profit margins can be very demanding, and people sometimes aren’t even aware that small, family-owned farms like hers still exist, Cook said.

The U.S. government controls the sale price of milk, so the majority of these farms have had to diversify their businesses over the years to remain profitable, with many opening farm stands and serving ice cream, like the Cook family has.

“Spending money at a local farm is putting money into our community,” Cook said. “It’s not going anywhere else. We turn it around and spend it again in our community. So, it keeps our community strong.”

Participation in the Dairy Crawl has been at an all-time high this year, according to Barstow Manz.

Melissa Gordon first heard about the Dairy Crawl late last June and was excited to participate with her husband and their 4-year-old daughter, Kari, for this year’s event. Her family recently moved from Springfield to Belchertown, and the Dairy Crawl has allowed them to explore several farms she previously never knew existed.

“It’s definitely a fun opportunity for people to discover new places,” Gordon said. “Places like Flayvors of Cook Farm — we drive by all the time and say ‘Oh, we’ll stop in one day.’ But, now they’re on the passport, so we finally got to stop in, and I was like, ‘Wow, this is what I’ve been missing.’ Even if we don’t win the raffle, we’re customers at some of these places for life.”

Read the article on MassLive

Thanks for subscribing! You will begin receiving Barstow's monthly newsletter. You can unsubscribe at anytime.

Something went wrong. Please check your entries and try again.